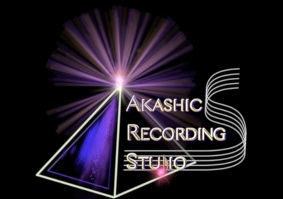 Located in the north Boulder mountain area. Akashic is one of the music industry’s top choices for artists, producers and recording engineers.

Perched at the end of a beautifully scenic paved road, the studio is an inspiring place for artists best performances to be captured with the highest level of audio integrity. Akashic is considered by many in the professional recording community as the best recording studio in the Denver and Boulder area in terms of sonic excellence. 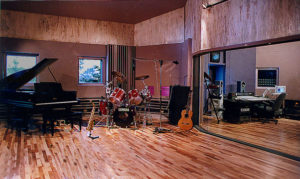 A stunning microphone and microphone preamp assortment is not all that Akashic has to offer. Coupled with many of the recording history’s golden pieces of outboard gear, converters and an atomic clock, cable and recording studio infrastructure, instruments and voices sonically come alive and assume a dimensional realism not possible when a system is not optimized. While the sound of the voice or instrument is the most critical part of the recording, the space the sounds are being produced in contributes quite a bit to the psychological feeling the listener will experience.

Akashic is designed by an award winning design group and employs many cutting edge recording studio construction practices to achieve sonic isolation and great sounding spaces while maintaining a sense of everyone in the session being in the same space. Between the control room and main recording room there is half inch and three eighths inch sound laminated glass with an eight inch air gap extending from the floor to six foot eight inches. Similar construction windows to the wilderness outside gives the studio an open feeling. 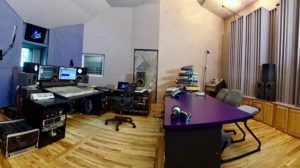 Many design considerations were integrated into Akashic Recording Studio’s conception and construction. Every aspect and component of the infrastructure, from the power system to optimized electronics have been upgraded to optimal performance for music and sound recording. 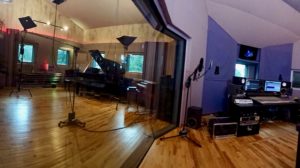 The result is a comfortable, professional space where projects can realize their potential. The studio has seen a wide spectrum of music, audio book and other sessions, made possible by the integrity of the studio building, the infrastructure and recording system.